Rhys Parker and his best mate, Paul Hoffman, have had remarkably similar career paths. The pair grew up as neighbours, both filling in pocket money gaps with work at Paul’s parents’ winery in the Swan Valley, a wild and semi-abandoned affair that Paul’s dad, Peter, bought in 1986 and pulled back from the brink. Although they spent their teenage years pruning and picking fruit from the gnarled old vines at the Hoffman’s vineyard, both ended up in environmental consultancy roles.

At university, they studied the same science course, but Paul went down more of a botany, ecology line, while also fitting in a viticulture and oenology degree. The latter enabled him to pull the levers on the family winery for a while, before he travelled the world as an environmental consult. On one of those trips, to the Loire Valley in 2007, he tripped over the natural wine movement and never quite recovered. Rhys, on the other hand, did most of his environmental consultancy work in the mining, oil and gas sectors, and came to winemaking later, as the gravitational pull of Paul’s influence became irresistible, and the slog of living on the road and in meetings took its toll.

Paul tuned the family’s Swan Valley Wines into a ‘natural’ affair, exploiting both the enviable resource of near-century-old grenache and chenin blanc vines, which he was farming organically, as well as deferring to the “entire ecosystem of yeasts and bacteria” present in the vineyards to ferment the wines, doing things as simply as he could. And while Rhys lives in Dunsborough, a bit closer to his day job at a very recognisable Margaret River winery, he has been consulting to SVW for the last three years, working with Paul closely on his brand. It was only inevitable that a partnership would be formed, and thus was born Vallée du Venom, an even split of input, ideas and rewards.

The SVW ethos provides a good snapshot of the approach with VdV, with the primacy of fruit quality key, followed by a hands-off approach in the winery. It’s a new affair, with only two wines under the label so far, a 2016 Bordeaux blend fermented naturally in an old concrete tank, which was previously used for ‘port’ production, and a pét-nat made from chenin blanc grown on Swan Valley granite. 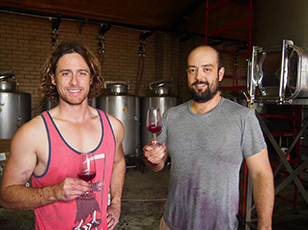