Western Australia’s Swan Valley is Australia’s second oldest wine region, a treasure-trove of old vines, history and rich cultural connections, yet it is barely recognised by those not from the west. And for those more familiar, the wines are typically seen as more workmanlike than aspirational. On Perth’s doorstep, the Swan cedes most of the attention to Margaret River and the Great Southern. Well, while the Swan became deeply unfashionable for a time, the 2020 Young Gun Top 50 features two game-changing makers – Vino Volta and Chalari Wines – that encapsulate just how exciting the region is right now, and it’s only getting better.

The Swan is somewhat different to other Australian wine regions, with a strong southern European influence, particularly from Croatia. The diaspora after both World Wars saw migrants flood the region, developing it from the mixed agricultural area it was to a vineyard hub, both for wine and table grapes. And while the varieties originally planted in the Swan may be familiar, their origins are also unlike other Australian regions.

“The Swan Valley has been making wine since 1829 but is a bit of an underdog wine region with lots of old vines and old traditions. It has a unique make up of vines originally coming across from South Africa in colonial times,” says Garth Cliff, “owner, maker, doer” at Vino Volta.

That vineyard composition means that the Swan has a set of vines that are not anchored in the Busby Collection (James Busby imported Australia’s founding collection of vine types in 1833), at least the old vines, but rather have their own signatures, and no doubt ones that have become unique over near-on 200 years of selection, adaption and replanting. It’s a viticultural gem, and one that has long been glossed over.

“We are focusing on what we see as our regional stars, chenin blanc and grenache, trying to find the best parcels and make the best wine we can out of them. In part, this is a mercy mission, as we need to elevate the value of the wines and the grapes to keep this wonderful bit of heritage intact and in the ground,” Cliff says. 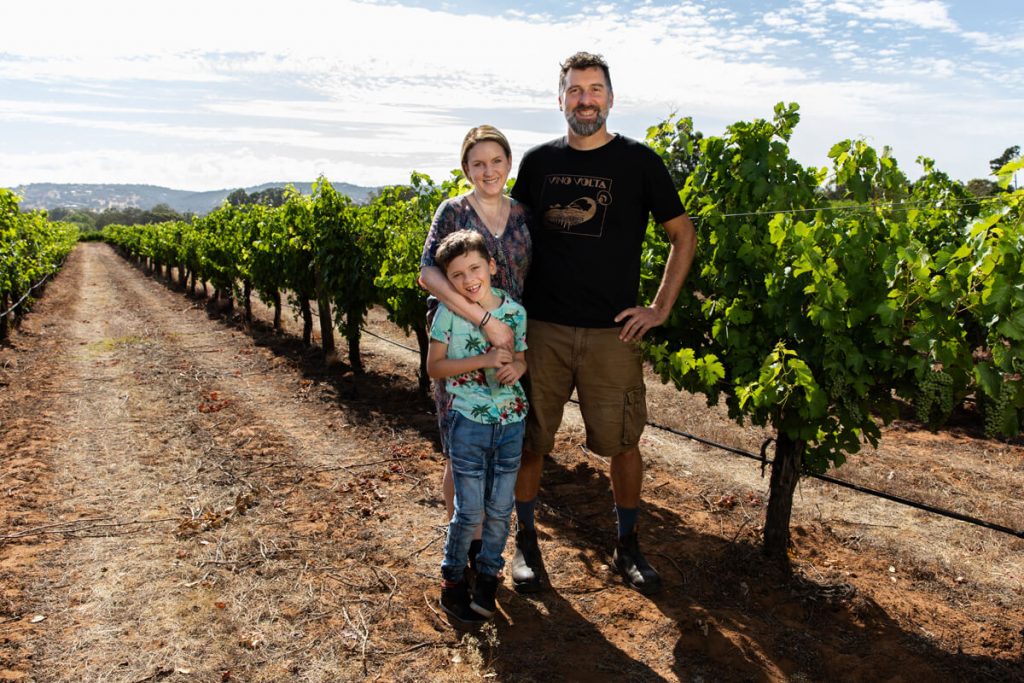 Garth Cliff of Vino Volta with his family at Rocket’s vineyard in Upper Swan, with 25+year old chenin blanc vines that goes into their ‘Funky and Fearless’ wine.

Cliff worked at the Swan Valley’s most iconic producer, Houghton Wines, for a decade before launching his Vino Volta label in 2018. That was inspired in part by the potential he saw in fruit that was being blended away or just not accorded due respect. “I see some great fruit and vineyards in the Swan Valley and want to be part of the group of winemakers and grape growers that help elevate them to their full potential.”

One of the vineyards Cliff sources chenin blanc from, in the Upper Swan on sandy loam, is managed by Rob and Genevieve Mann of Corymbia (2019 Young Gun Finalists). Rob has deep roots in the Swan, with the Mann name Bradmanesque in West Australian wine circles. Jack Mann was the winemaker at Houghton, making 51 consecutive vintages of Houghton White Burgundy, as it was then known, starting with the 1937 from Swan Valley fruit. And that cricket reference has deeper roots, with Rob’s father, Tony, the first Australian test cricketer to score a century as a nightwatchman, in 1977 – and to help win a tight test, too.

The Corymbia vineyard was planted by Tony, with a young Rob assisting, and it is the base for the family operations today. For Rob, who helmed Margaret River’s Cape Mentelle for a decade, anchoring in the Swan is a significant statement about the legacy of his family in the region and the potential for its future. The Corymbia label started with a homage to the mid-weight Australian ‘Burgundy’ styles of old but built on the forward-thinking base of tempranillo. And while that wine taps into the past, aligned with a modern sensibility, makers like Cliff and Alexi Christidis of Chalari Wines are walking down roads somewhat less familiar. 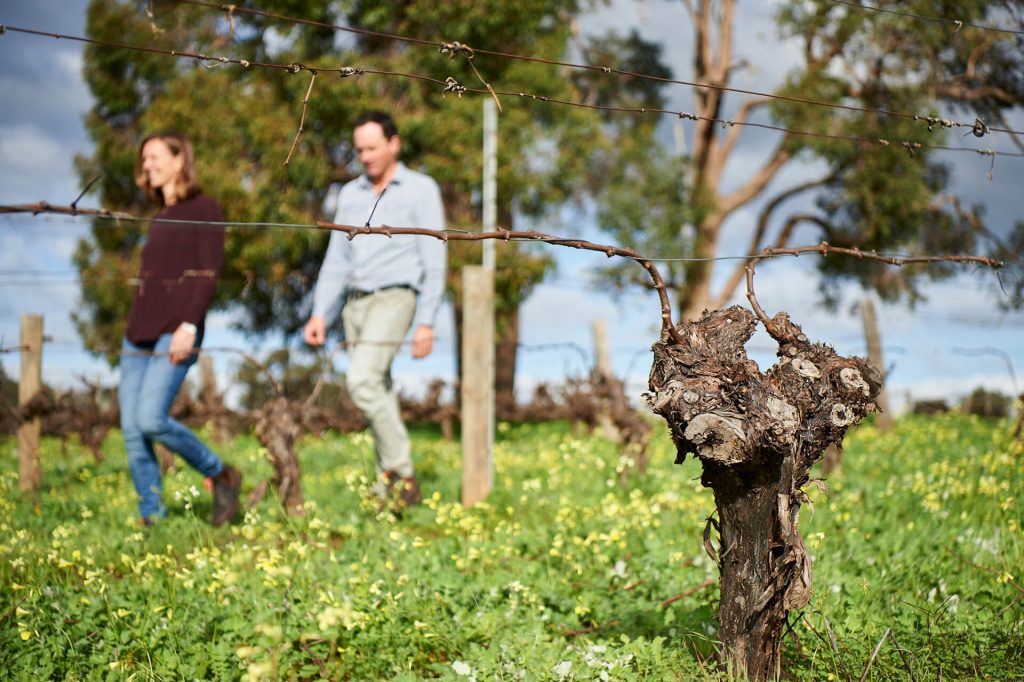 Cabernet sauvignon vines at Corymbia’s vineyard, planted in 1985, goes into their tempranillo blend. Genevieve and Rob Mann in the background.

The first Vino Volta wine was a chenin blanc raised under a veil of flor yeast, and Cliff bottles two pét-nats from both chenin blanc and grenache, while grenache is given brightness, spice and complex structure with both whole-bunch and whole-berry fermentation. Christidis goes a step further still.

Working and consulting primarily in the Perth Hills and Peel region before striking his Chalari label in 2017, Christidis has embraced the Swan in less conventional ways. He makes a Retsina-inspired chenin blanc (infused with pine sap) – a homage to both the region and his heritage; a skinsy vermentino that taps a future-proof variety on the shoulder with some very of-the-moment, though ancient, techniques; and a sulphur-free chenin blanc pét-nat.

And while these wines play outside the Swan Valley playbook, Christidis is deeply attached to the history and almost lost ways of the past. And he is buoyant about the future, too, citing Swan Valley Wines’ Paul Hoffman (2019 YGOW Finalist and Best New Act winner with Vallée du Venom – a partnership with Rhys Parker) as a leading light. “The incredible depth of knowledge and thought that goes into every wine is something all winemakers should aspire to,” Christidis says. 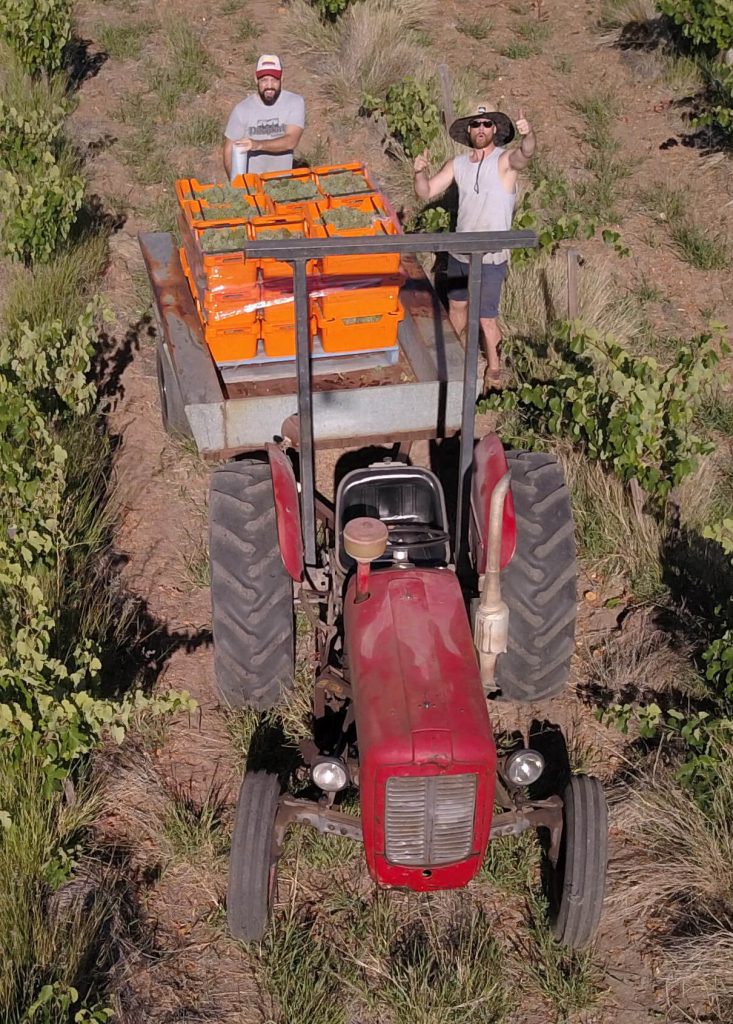 Hoffman works naturally, with no additives bar sulphur, and then not always. He uses old concrete fermenters, qvevri buried in the ground and larger format oak, and often leaves wines on skins for long periods. He focuses on grenache and chenin blanc, from his family’s organic vineyard, but also pushes into Mediterranean varieties that are gaining traction in an warm area that is clearly warming further. He currently also works with tempranillo, sangiovese, aleatico, mourvèdre, greco, tannat and malvasia, highlighting the ever-diversifying raw materials now available in the Swan.

Christidis and Cliff are both similarly working with the region’s classic varieties, while also testing new waters. “I am keen to inspire the growers of the Swan Valley and surrounding districts to consider varieties that should be suited to our warm climate, mostly out of Italy and the Iberian Peninsula,” says Cliff. 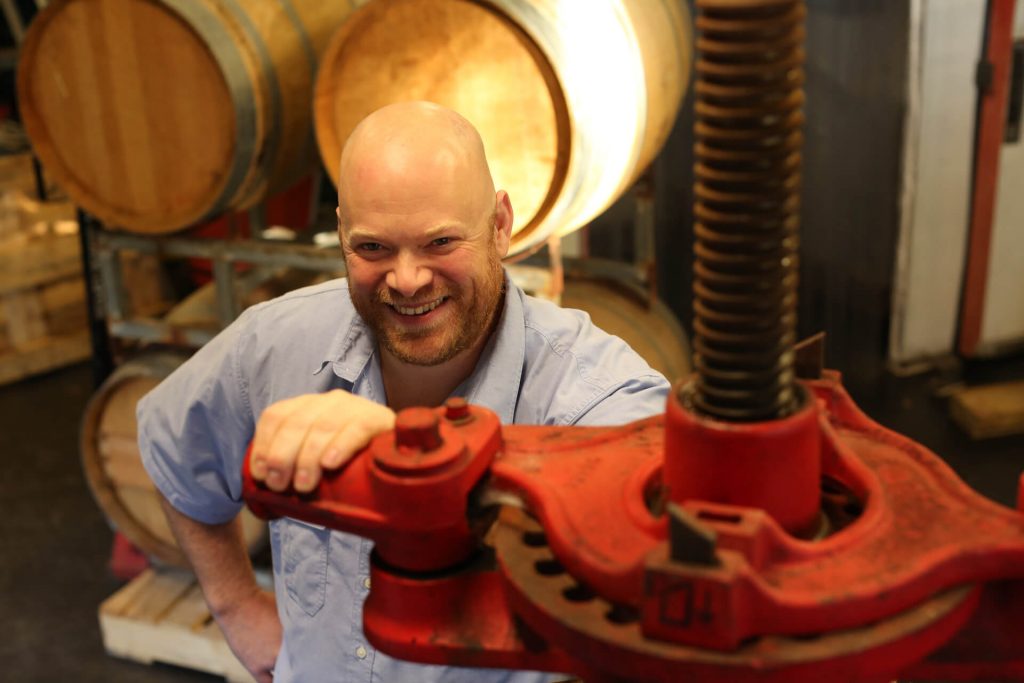 Alexi Christidis of Chalari Wines with a basket press.

While the Swan Valley may never pull the radiant glow of the spotlight off Margaret River, that’s not really the point. The Swan is a region of strikingly individual character and singular origins, and it’s a region that’s developing along excitingly progressive lines while also being essentially connected to its history. The traditional staple varieties of the Swan are being expressed in new ways, and new varieties are adding another dimension, with less-conventional techniques layering in detail as well as unearthing new possibilities.

Last year was the first time the Young Gun of Wine Awards had a finalist hailing from the Swan Valley, with both Corymbia and Vallée du Venom joining the ranks. This year, Vino Volta and Chalari Wines underlined that this wasn’t by chance. These are the makers leading the charge for a region on the rise, with more exciting talent no doubt waiting in the wings. 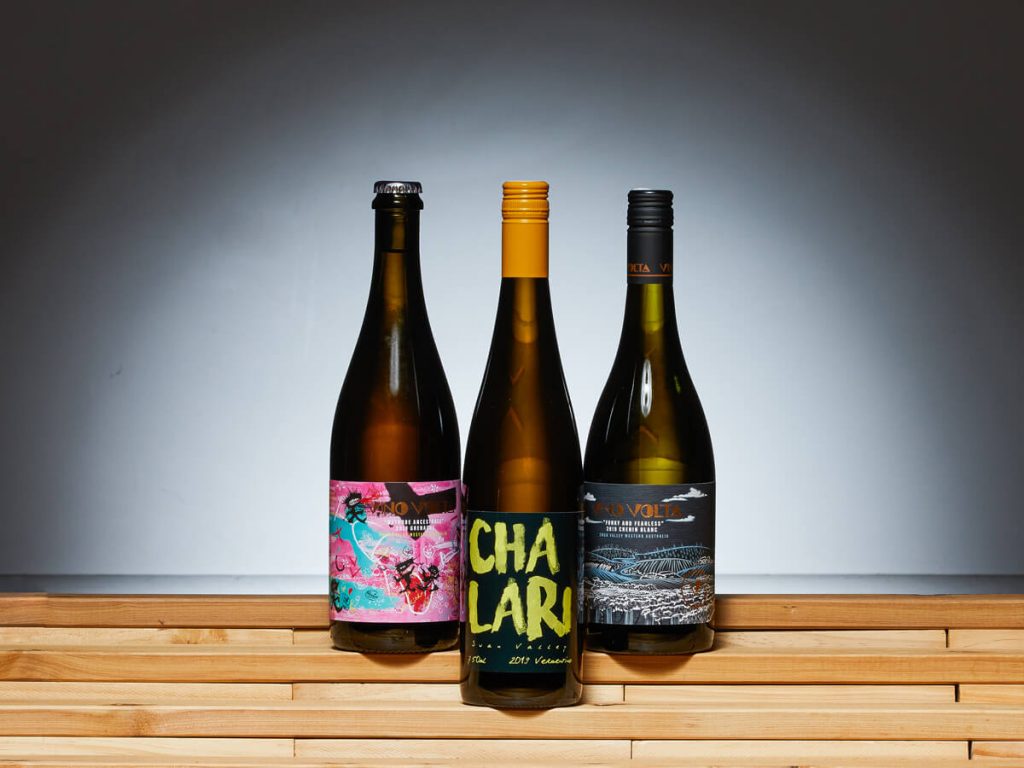 Faintest haze to the pale golden wheat colour. There’s a nutty lift here, which is subtle fino sherry notes, briny green olives, lemon peel, ripe apples, calvados and a hint of rye sourdough. There’s a malty note here, but it’s super bright and lifted, too. The flavours carry to the palate, with those fino and malt notes carrying through along an intertwining of zingy acid and lightly chewy skinsy tannins, with neither dominating. Quite moreish, with a salivating, sapid quality.

As expected, this is super aromatic. The pine note is quite complexly herbal, sappy and lightly spicy, with a core of lime peel/cordial fruit flavour running through it; a spearmint character, too. The palate is dry, but that pine resin is giving it a rounded viscous feel. There’s a gentle chenin richness to the palate, with layers of citrus and minty tones. Bright acidity fires through the layers of piney texture and chenin pulp.

There’s an appealing smoky, struck match note here, giving it a chardonnay-like feel, but that impression is tempered with aromatic highpoints of lemongrass, kaffir lime, ginger and a lemon curd/peel note. There’s a viscous richness, again knitting into the chardonnay vibe, but lightly grassy and tropical notes push it in another direction, with a savoury waxy character to the palate and a burr of grape/lees tannin giving this structure beyond the decent rip of natural acidity.

Pale pink/orange. Super fragrant, with a crunchy bite of red cider apple, wild red fruits on the savoury side, red currant, cranberry, raspberry, cherry with red floral notes, a nutty edge and chalky almost pumice note. There’s a cherry pit pithy edge on the palate and quite fine, gentle fizz, with a soft and creamy feel to it. This has a lick of texture and richness to it, but it is vibrantly fresh and somewhat effortless.

SEE THE FULL LIST OF TOP 50 WINEMAKERS IN THE 2020 YOUNG GUN OF WINE AWARDS HERE. JOIN IN OUR VIRTUAL EVENTS HERE, AND ALSO VOTE ON WHO WINS THE PEOPLE’S CHOICE UNTIL JUNE 1. 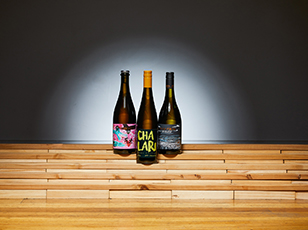